Pyjama Party in the Belly of the Whale – Nevena Ekimova 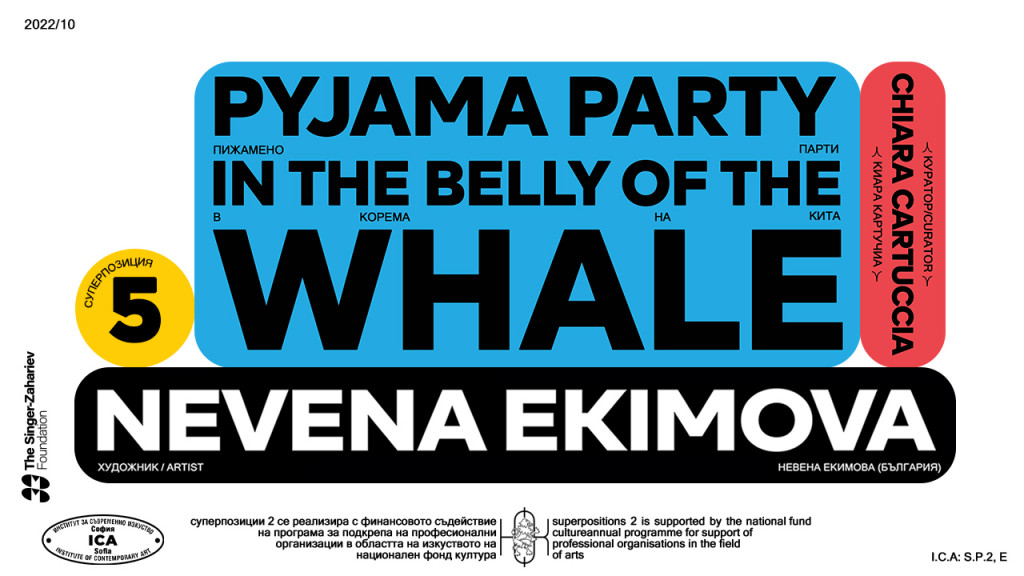 Pyjama Party in the Belly of the Whale

Whaling the Institut/ion. Or the Rare Virtue of Interior Spaciousness

The first time I visited the ICA Gallery, as a stranger to Sofia, it was slightly difficult for me to find my way to the right apartment block, to the right flight of stairs, leading to the correct entryway. And it was even trickier to overcome that shade of childish shyness, which makes the gesture of approaching a new doorbell always ring with awkwardness to me. During our first conversation – last winter, on Zoom – Nevena Ekimova and I debated about that very feeling of entering a space, any space, a gallery space, and then this gallery space, when one feels seemingly uninvited. May I? Shall we?

Possibly, the crisp white volumes now hosting ICA once contained somebody’s home. As this space was just a flat nestled in an unassuming apartment building, this same set of walls may have demarcated the boundaries of somebody’s domestic universe. Maybe this was an oasis of private comfortability. A place to take the shoes off and forget about the outside. A place for day-time boredom, and night-time dread. I imagine the old face of the space as made of many surfaces, soft and hard, taking on dust and life all at the same time. This singular private, which I fantasise as multifaceted and imperfect, necessarily opaque, gave way to the attempted neutral transparency of a white cube. The home turned into site for an art institution to reify itself, in real-estate blood and flesh. If the imaginary private flat I draw above was only welcoming to the few who belonged in a certain circle of family and friends, the institutional flat is supposed to be easy to find, easy to access, for everyone. Nonetheless, the doorbell rings the same way.

I got to get a glimpse into the practice and world of Nevena Ekimova through distant conversations, fragmented sharing of past projects’ documentation, anecdotes, pictures of my (small) and her (big) dog. Since our first encounter, we set our minds on space hacking and manipulation. We talked about the show as a misleading process, which would turn ICA’s white cube into a foreign yet warm, awkwardly welcoming space. Our plotting stemmed from the merging of the exhibition-making mandate we received with Nevena’s core artistic modes, methodologies and beliefs. Her work is characterised by a strictly serious playfulness, which echoes throughout the entire process of conceptualisation, material hunting and (re-)working. The artist often subdues to a hoarding urge. The artwork is made from found material, used clothes, shredded fabric, fake fur, discarded plastic and wood, whose search and collection requires the contribution of an extended network of casual collaborators. The same quest for abundance is replicated in the production itself, which often entails demanding work being performed by the artist, who remains busy in dis/assembling, knitting and stitching, tearing things apart and pulling them together, for weeks and months on end. This is an expansive working process, one that takes time, and takes over all of the artist’s spaces, both private and public. Still, Nevena seems not to fight the material’s mutiny back, as she toys with the irreducible elusiveness of her disobedient objects.

In a 2014 essay, curator Chus Martínez recalled artist Raphael Montañez Ortiz’s proposition of starting every exhibition in his newly founded community museum, El Museo del Barrio in New York, with a rainforest. Martínez goes on describing the rainforest as the very opposite of a white cube, its radical other: ‘[T]he opposite of culture, the opposite of an exhibit, the contrary of scale, the opposite of legibility, the opposite of ideology, order without subject matter—or rather, without any subject matter other than life in itself’². The rainforest is a site of unorderly and unmediated eventfulness, whereas the white cube might well be one of those institutional ‘structures that process and metabolize raw and potentially toxic internal or external stimuli into thoughts, representation, and meaning’³. The white cube as the good-looking stomach of the digesting, all-filtering art institution.

Over our second email exchange, Nevena and I settled on the image of a whale’s belly. The exhibition will be just that, the belly of the whale. But not just that, the show is what is happening in the belly. A party. Better, a pyjama party. Underwater domestic entertainment. This exhibition attempts to produce a different space/time within the gallery walls, for other, new people to come play, lie down, sit, affect and pollute the former white cube. However, alongside a whimsical representation of visceral animal abysses, still stand lopsided versions of an art space’s peripheral infrastructures, as the gift shop, or the omnipresent private-view-time makeshift bar. Far from radical otherness in its formalisation, as well as in its acceptance of digestion as a functional method, the exhibition rather wishes to create a moment of quiet disruption of the ordinary. This does not happen by fully turning the gallery back to its homely origins, but rather through the invention of temporary and unstable conditions, which might allow for a more comfortable institutional space to take shape and be inhabited.

‘Pyjama Party in the Belly of the Whale’ reflects a desire for softness and permeability, for responsiveness to movement, change and chance. As the whale’s belly is an alive and lived interior, which embraces the un-comfortability of eroding fluids and inevitable demise, the whaled institution allows for the metabolization of mistake and disorder, too.

Ultimately, this exhibition is a murmured wish upon an art institution’s body that is spacious, porous, and able to maintain an ever-adapting temperature of its own.

‘Pyjama Party in the Belly of the Whale’ is the fifth exhibition in the year-long program Superpositions 2 / Entanglement, 2022 of the Institute of Contemporary Art-Sofia. The program includes six exhibitions, each one a collaboration between an artist and a curator, along with a cycle of educational events and discussions. All these examine the entanglement of contemporary art with politics, science and technology, popular culture, gender and social movements, ecology and migration.

The program is supported by the National Fund “Culture” / The Annual Program for Support of Professional Organizations in the Field of Arts and the Singer-Zahariev Foundation.

Nevena Ekimova is a Bulgarian artist, currently based in her hometown of Gabrovo. She studied contemporary art in Norway and Iceland, and got her BFA at the Valand Art Academy in Gothenburg, Sweden. Besides participating in exhibitions, she often works with public institutions and creates large-scale interactive projects for children and adults.

Chiara Cartuccia is an Italian-born curator, writer and researcher based out of London. Her curatorial practice is grounded in the analysis of the epistemological possibilities of performance and performativity, as arenas for knowledges reconfiguration and making. She is currently engaged in long-term research on the Mediterranean as imagined/imaginative geography, focusing in particular on the ramifications of practical Mediterraneanism(s) in the working and thinking of art institutions operating within Euro-Mediterranean contexts.

Chiara studied Art History at the University of Rome, La Sapienza, and was a research fellow at Freie Universität Berlin and Akademie der Künste Berlin. She holds an MA in Visual Cultures/Contemporary Art Theory from Goldsmiths College, University of London, and she is a PhD candidate at University of Amsterdam, ASCA. She is a freelance contributor to art magazines, and her writing has been commissioned and published by ArtReview, this is tomorrow, Contemporary &, Sharjah Art Foundation, Afterall. She is Visiting Research Curator for Unidee Residency Programme at Cittadellarte-Fondazione Pistoletto, for the season 2022/24. 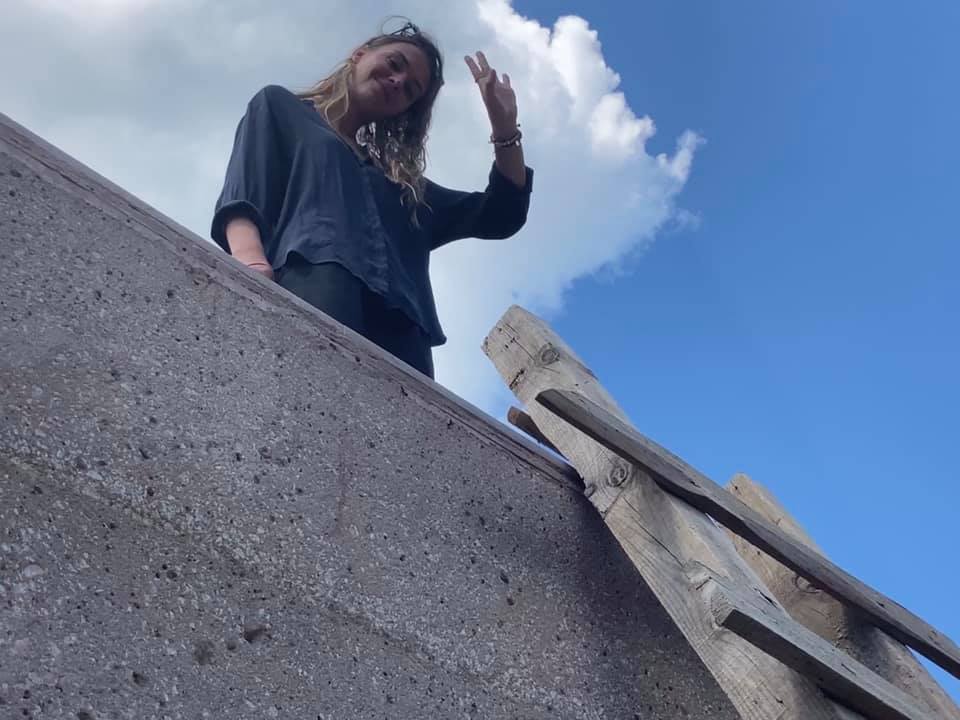 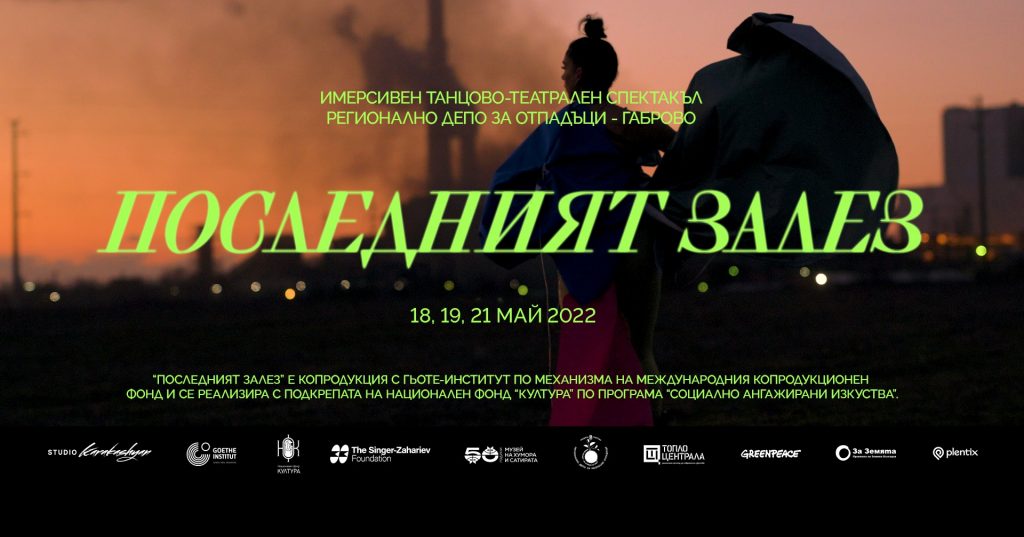 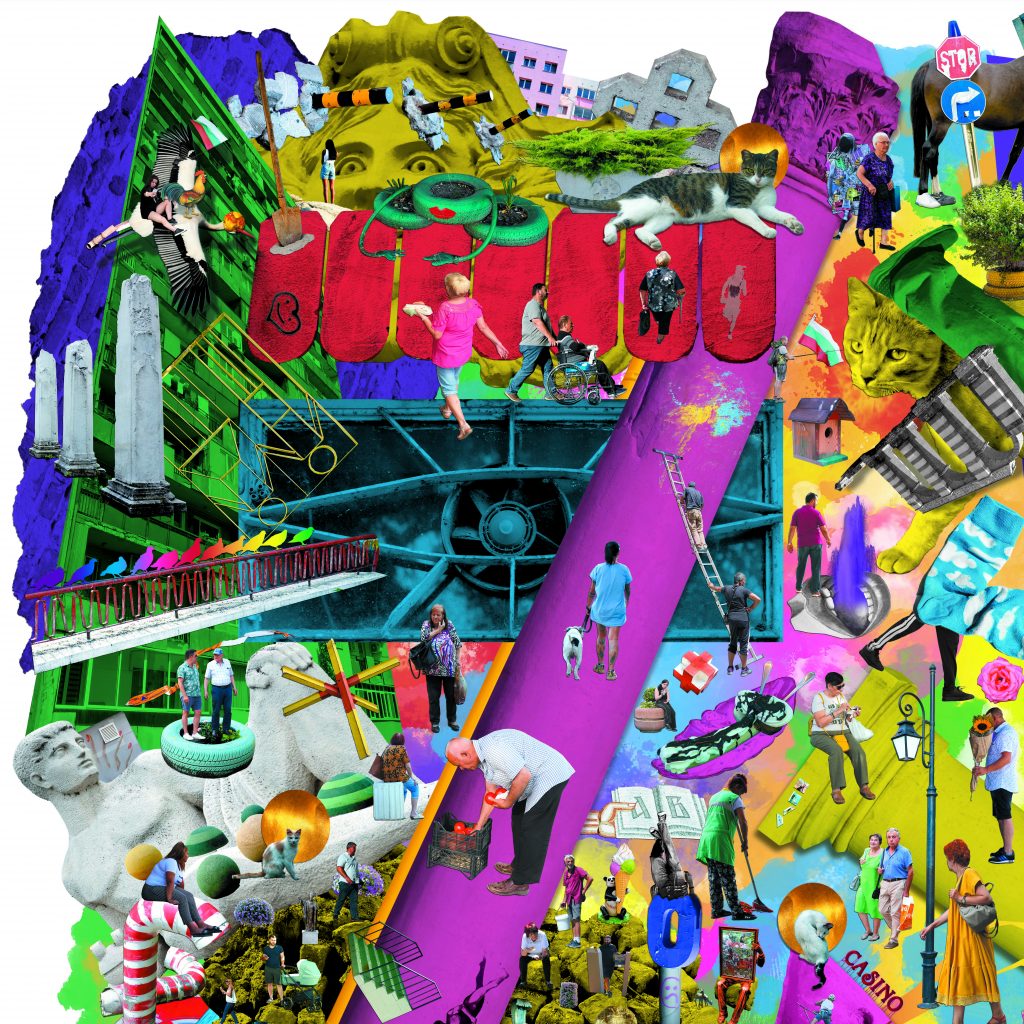